More than a year has passed since our WWOOF experience in the rolling, verdant hills near Lagorce, France. But, like every life-affirming experience, I talk about it all the time. 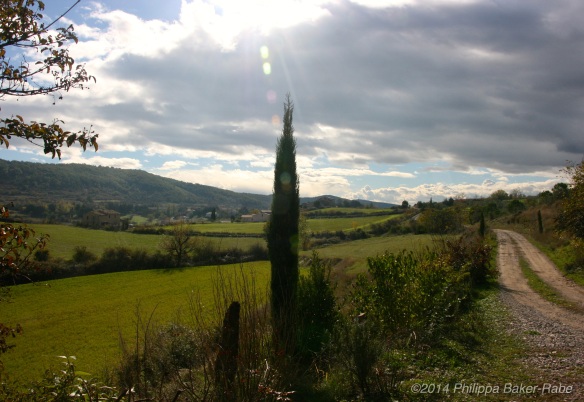 The rundown: a family of four welcomed us to their roughly 3,000 tree, local, independently run organic olive oil farm. Two parents, one son (a grown man slowly taking over his father’s farm), one son’s live-in girlfriend (who used to be a WWOOFer, oh lala) and two massive dogs. We collected olives for over a month, harvesting what felt like the full scope of their immense orchard. We learned some French, ate with the family at all times, and lived a remote, self-sustained life.

A certain kind of bliss is achieved when your hands get dirty, when your clothes get soaked, and when you eat the very thing you picked that afternoon.

Fast-forward a year and we’re shopping:

“What kind of olive oil should we get?”

A common Trader Joe’s question in the States—a variety of Spanish, fine-pressed, French, infused, etc. etc. meets us upon the shelf.

My mind, though, flashes back to the large cisterns of freshly juiced olives on the farm, the farm (like Sherlock’s the woman, and just as seductive). They had four gleaming silver vats of on-tap olive oil (yes, like beer), each slightly different in variety. The spicy one, ah. The smooth one, ohh. Oh, you spilled? That’s fine, that’s fine! Rub it into your hands, your face, your arms. Good for the skin.

World-Wide Opportunities on Organic Farms. The name pretty much sums up what you plan to do. Work for food and a roof on an organic farm. Anywhere in the world.

The WWOOFing experience is highly dependent on your hosts. Before our trip, we emailed a number of interesting farms. We ended up with a slightly luxurious set-up: our own room, four poster bed, a friendly (and rotating) third WWOOFer, and the best damn olive oil you’ll ever have.

Each country has its own website and slightly unique system. The French one is easy to navigate and, as it’s France, has a TON of good-looking farms with friendly, fair hosts. You will work, though. We met an experienced WWOOFer who had stayed at four-to-five farms consecutively, all in France. Each had their own system, and some were not so great.

Email your potential hosts, talk with them, inform them about yourself. It did us wonders. As we trekked through Europe towards that little farm, we connected weekly via email. “You are like migrating birds!” our French host (mother) wrote in one, waiting for us to arrive.

A Day In the Life

Up at 7:00AM. Not bad at all. Coffee or tea, endless loaves of bread and toast, jams and honey and Nutella spread. A light breakfast for Americans (they frown on sausage and eggs in the morning over in rural France), but after a month straight that jam is so freakin’ sweet!

Out to the fields. Almost every day, if the weather permitted, was spent olive picking. If it was pouring (which it did fairly frequently), or the timing wasn’t right, or they had another project, we went and tackled that. Light house construction, making olive tapenade, labeling jars for sale,  organizing their warehouse. 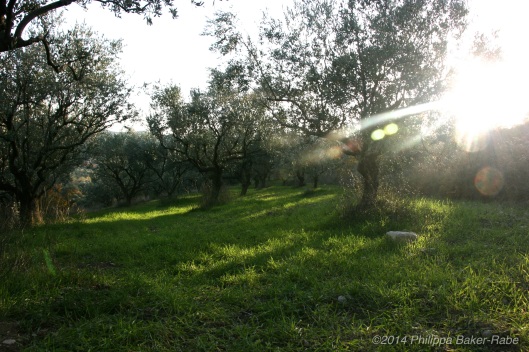 But most days it was olive picking. This was done either by hand or by net.

Hand-picking meant wearing a basket for collection and trekking up a hill, led by the olive-master, to a line of trees. The smaller trees, usually not taller than six or seven feet, were picked by hand. These days were the easiest. Stunning, too, as their orchard was naturally irrigated on the hill, with incredible views of endless Ardeche forests and streams.

One sunny afternoon we were left alone, to pick from the trees, and I played a little reggae on my phone’s speakers. You climb up in ‘em, get real close. The leaves are gentle, the limbs supple. They are peace, after all, and hugging one while picking delicious fruit is, well, pretty perfect.

The larger trees, and the fatter harvests, were done with filet, or nets. Ugh, the nets.

Essentially, one must blanket the line of trees on either side with light but fairly tough netting. This meant a two-person team rolled a huge net (half a football field or so), down the length of the tree line. One edge of the filet had to be flush with one side of the trunks, and spread evenly towards the line of trees above or below. Over rocks, boulders, prickly hedges, etc. Then another net on the other side of the trunks.

After the nets were laid, the aforementioned son and girlfriend took an olive shaker, like a motorized rake that jiggles, to bounce the olives off the trees. These would fall into the nets, which we would funnel into gleaming heaps of black, purple, and green olives, to then be placed in red crates.

The longest day we probably packed about forty or so crates. Work until the sun goes down, come back to a beer, play with the dogs until dinner.

Now, the day was always split in half by lunch. And lunch in rural France was the heftiest of meals, the one in which all family was present, most food was consumed, and a generally excellent time was had by all.

These occurred every day between 12 and two in the afternoon, and were always followed by small cups of coffee and sweets. I miss that coffee and those sweets (not to mention the hand-made delectable French feast that occurred prior) more than most things.

Work days ended when the sun disappeared, and, after dinner, we were left to our own devices. We were there in November, so I spent my time NaNoWriMo-ing (almost done with that novel!) and generally relaxing.

There are too many fine, and some furious, memories to recount them all here. If you let yourself, if you give yourself to the intimacy of someone’s home and life and dynamic, and you enjoy the outdoors and a farm-life, WWOOFing can truly be a blissful state.

We spent two lunches out in the hills. The coffee was brought in a thermos, the roasted lamb packed into tight tupperware, the olive oil siphoned into a bottle. The dogs sat with us on the gravely, dirt strewn hill and we would recline, looking up at a quickening cloudy sky, and try to relate our world to their world.

There was the gravy boat, deemed le sauce, which routinely contained a half cup of fresh olive oil, minced garlic, and a sliced shallot. This was not ever washed, and passed around with much love, to be poured over each and every piece of bread, green salad leaf, and flank of char-roasted whatever.

There was the confusion of dialect, the clash of culture. We were lectured in broken English and subdued French on the idiocy of our government, our people, to allow a man like Mitt Romney contend for the President of the United States. Or, as we left the farm, to hear that the French will forever be more right than Americans due to their true removal of religion from public life.

The thing about WWOOFing, and about traveling, is that it makes you stop and look at what is happening. What is occurring in front of you–your face, your eyes. It makes you pause, and consider, and react.

Who are you in the face of a new, different thing? What do you like, what do you agree with? What sends your stomach into a fit of knots, or your head into a sea of migraine? Does the sky give you peace? Or perhaps the quiet, or the stars, or the simple rush of cars. In every new moment of the world that we witness, we further know ourselves.

6 thoughts on “To WWOOF in Rural France”